About Java, my projects and diorite.

Where UnknownType is some type that isn’t available at runtime, do you know what will happen when we will try to load that classes?

And… it will fail on the C class (java.lang.NoClassDefFoundError: UnknownType), if we change order of C and D we will see that ONLY class C can’t be loaded, why?
I started from trying other ways of loading and testing that 4 classes, first I loaded them using:

And then it works, so it is something related to class initialization, but why you can have field of unavailable type, but not a return type of method? And why it works if there is an exception?

There is only one place where you can try to find answer, the JVM specification, but after few minutes of reading about all class loading and resolving stuff I didn’t find anything that would perform such checks.
So if this is something related to class initialization, maybe it is a class verification? but why it happens that late, and why only that one case is affected?
Let’s forget about A and B, and check the bytecode of C and D classes (I will use simplified form of bytecode to improve readability):

And there is nothing special… we can only see that in the first case we don’t even touch UnknownType, so it must be something related to aload or areturn instructions, but we didn’t call this method, we only loaded a class that was containing it.
So the only one place where such checks are performed is class verification, so let’s try to run this code with -noveirfy flag.
And yes, it works! So now we know where to look: https://docs.oracle.com/javase/specs/jvms/se8/html/jvms-4.html#jvms-4.10.1.9
Let’s start with aload: 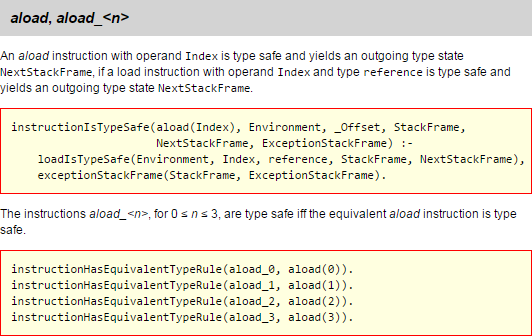 And nothing, aload does not care about type, it just push element to stack. So let’s check areturn:

And we can see that it perform multiple checks that involve return type, as it must check if value we want to return is compatible with return type of the method, and that cause JVM to load return type class, but there isn’t such class so we have our java.lang.NoClassDefFoundError: UnknownType error.
So… that would be everything I wanted to show you today, I hope you find this interesting (and you were able to understand my english and bytecode (✌ ﾟ ∀ ﾟ)☞).

If you want me to check something you can't understand, or explain some weird java behavior, feel free to e-mail me at: gotofinaldev@gmail.com or just write comment below!
Share this on → Tweet

« Welcome to my blog Performance of event bus »